How’s The Market?  Which One?

The first question is fairly common.  The second question is quite rare.  Why?  Because there are numerous stock market indexes and from the narrowest to the broadest there is a huge difference in the stocks included and their returns. 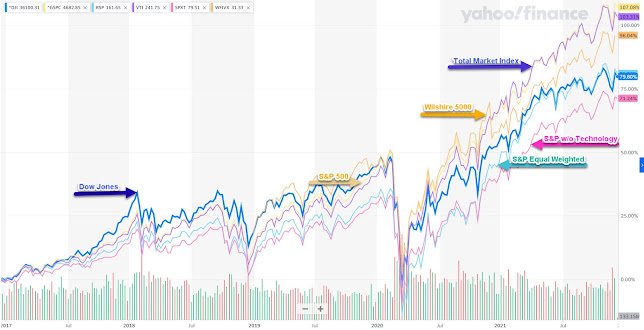 The best-known index is the Dow Jones Industrial Average, which is composed of 30 of the largest U.S. companies.   The Dow, like most other indexes, is a biased reflection of market performance.  The obvious reason is that it is a small sample, albeit that of the largest companies.  Less obvious, but more important, is that the index movements are primarily driven by the higher priced stocks in the group.

Professional investors pay more attention to the Standard & Poor’s 500 Index, the movements of which often vary substantially from those of the Dow.  The S&P is weighted by the market value of the companies’ shares, which means that the biggest companies in the group have the greatest impact.  In recent years, major technology companies such as Meta (née Facebook), Apple, Amazon, Netflix, and Alphabet (née Google) have been the main engines for gains.

A more accurate portrayal of how the S&P has been doing is seen by viewing the Invesco S&P 500 Equal Weight exchange-traded fund, which equally weights all the companies included, so the changes in the prices of the smallest companies have the same impact as those of the giants.

The ProShares S&P 500 Ex-Technology exchange-traded fund takes this one step further by measuring the S&P 500 without the 70 technology companies that are in the index.  That slices off about 30-35% of the aggregate value of the companies covered, but it also shows that the typical returns from most stocks are far lower.

Rather than narrowing, Vanguard’s Total Market Index exchange-traded fund includes a total of 4,124 different stocks.  Even broader is the Wilshire 5000 Index Fund, which (no surprise) includes 5,000 stocks.

So when someone asks you about the market, you need to ask which one.

April 14, 2021
Up, Down & Sideways   In past years, the warmer months brought with them a time to turn one’s thoughts to more blissful endeavors.   Although childhood may have been many years ago, what lingers is the apparent freedom from care we felt when at last we were done with school.   Much has changed since those halcyon days when time hardly seemed to move.   Back then, the days went by slowly and the important decisions were few.   Now it’s almost as if you don’t know which direction to turn first. It’s all about communications and the seeming necessity of keeping up to date with what’s going on.   Much of the rising flow of developments may have little impact, but even so it’s no longer a time when we can disconnect until September. From an investment perspective, the challenge is to sort through the rapidly growing mountain of information to isolate the data that is critical and take action where it is needed.   On a grand scale, it’s a matter of separating the wheat from the cha
Post a Comment
Read more

May 26, 2021
Growth vs. Value? One of the longest-running dichotomies in investing is the ongoing tug of war between growth stocks and value stocks.   Growth stocks are generally seen as companies that are growing consistently and, typically, at above average rates.   Value stocks, on the other hand, are companies whose progress is less consistent and often relatively slow.   At first glance, one wonders why investors would look beyond growth stocks to fill out their portfolios, but there’s more to the task of portfolio construction than just picking market stars such as Amazon, Apple, Facebook, and the like. Here’s the hitch.   Over time, most growth stocks will turn in better returns than most value stocks.   The key word here is most.   A portfolio of diversified growth stocks will usually be selling at significantly higher valuations (price-earnings ratios) than a portfolio of diversified value stocks.   Why?   Because more rapid and more consistent growth rates give investors greater con
Post a Comment
Read more

April 21, 2021
How is the Market Doing? Despite all the noise being trumpeted by the media, the daily prattle about market moves is often wide of the mark and overloaded with information that is misleading or just plain inaccurate.   How else to explain a jump of several hundred points one day followed by a plunge the next day?   That makes no sense. Over time, the foundation for stock valuations is underlying profitability of the companies involved.   As profits increase, stock prices rise, though not necessarily in perfect reflection.   The relationship tends to be meaningful over extended periods, but often not in shorter spans of time.   That’s all about changes in investor psychology.   So let’s begin by defining the “market”.   If we are referring to stocks, the most common reference is to the Dow Jones Industrial Average, which consists of 30 major companies whose progress might be considered representative of the U.S. economy as a whole. The majority of the companies included here are r
Post a Comment
Read more