The Impact of Psychology: Beyond The Numbers

However much analysts attempt to parse corporate data and extrapolate into the future, the reality is that this is a fruitless quest.  Whether one’s goal is divining a reasonable price for an individual stock or the stock market as a whole, the hitch is the same.  Over time, there is a distinct correlation between changes in company fundamentals and the values given to those fundamentals, but at any given time there is frequently a disconnect between what one might consider fair value and the actual market price.

On occasion, there may be parity between the two, though more often than not the market price will be above or below the level that might otherwise be viewed as normal. The variances are largely explained by attitudes toward the future.

At times when prospects are rosy, investors tend to be generous with their valuations and stock prices may rise well above benchmarks considered reasonable.  Conversely, when times ahead are expected to be difficult, the opposite situation develops.

A useful hypothesis can be created using the Standard & Poor’s 500 data for the past 50 years. During that span, the average price-earnings multiple for that index was 16.6 times.  By combining this multiple with the Standard & Poor’s 500 earnings for each year throughout the period, it is possible to create a measure of “fair value” against which to evaluate the concurrent market prices. 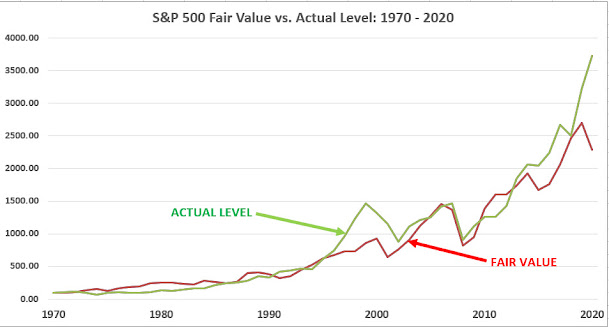 The chart of stock prices over the last 50 years shows notable correlation between values and prices through 1996 and then a distinct divergence during the dot.com excesses of the late 1990s. Talk of the new economy at that time led to unrealistic expectations and the oft-repeated phrase: “It’s different this time.”

The result was a market that was overvalued by two-thirds and it took more than five years to blow off the excess.  The market as a whole plummeted and more than a few technology issues that had soared towards hundreds of dollars per share either disappeared or were crushed to minimal levels.  The devastation was extraordinary, proving once again that what goes up much too quickly is inevitably doomed to collapse.

The flip side was two decades earlier, when the economy was stagnating and interest rates soared into the teens.  Market prices slipped to less than 50% of what could be considered fair value, the housing market was in the tank, the outlook for investors was bleak in the extreme, and interest rates were in the mid-teens.  It took another six years for those discrepancies to disappear.

During the most promising times, a stock’s price will benefit from improving fundamentals as well as a favorable economic backdrop.  In more difficult periods, discouraging economic prospects may more than offset whatever strength may be gained from an individual company’s good news.  At best, it may buffer price erosion.  The silver lining from all the storm clouds is the opportunity that accompanies them.  When it appears to be the worst of times, it may well be the best of times for courageous investors to buy.

That’s easier said than done. Given the lessons of history, the time to reap the richest rewards is when investors are too scared to act. The choice is always the same.  Either stocks are on sale or it is the end of life as we have come to know it.  In every case since the time when records have been kept, the answer has been the same: Stocks were on sale.

Similarly, when everything’s rosy and prognostications by the gurus start heading toward Fantasyland, it’s prudent to scale back expectations and take a more conservative stance.  It’s never as good or as bad as it appears.

May 17, 2020
Reality Check On the heels of the market plunge of late February and most of March, investors did a sharp about-face in April, bidding up shares at one of the fastest rates in recent history.  Although this recovery probably provided at least temporary comfort from the plunge, it would be unreasonable to view the rebound as a sign that things are all better.  They are not. For one thing, we are now in the midst of earnings reason, when companies report their quarterly results.  Some may have good news for the March quarter, but as we move through the current calendar quarter, only a few will be able to show continuing improvement.  Against the broad backdrop of U.S. business history, the months just ahead will almost certainly prove to be among the worst, from the standpoint of year-to-year comparison. With more than 30 million people filing claims for unemployment insurance, it would be difficult to expect anything other than bad economic news.  Who knows how many of these
Post a Comment
Read more

July 10, 2020
Jobs Are Up, But So Are New Infections Through the spring months, m ost of the economic data was extremely negative, with record declines in employment and consumer spending.  The speed of that decline had no modern precedent. We are now in a recession.   The shortest recession on record occurred in 1980 and lasted just six months.  Second place goes to a seven-month recession in 1918-19, which was tied to the Spanish flu pandemic.  The big question is: When will this recession end? Given surprisingly strong data in May, April may have been the bottom of this economic cycle.  If so, it will have been the shortest recession on record.  With massive support from the Federal Reserve, the federal government, and the reopening of previously closed businesses, employment surged unexpectedly.  At the same time, pent-up demand, stimulus checks, and generous unemployment benefits led to a reacceleration of commercial activity. Still, not all is rosy.   In his recent testimo
Post a Comment
Read more

July 21, 2020
Fixed Income: In a Fix Typically, the construction of an investment portfolio has begun with an approximate balance of 60% in equities and 40% in fixed income instruments.   Fixed income generally means bonds, but that includes bond funds and exchange-traded funds holding bonds.   The equity portion is intended to be the driver of capital appreciation over extended periods of time and the fixed income portion is supposed to provide stable, albeit more moderate ongoing rates of return. The theory behind this approach is that as the time periods measured have lengthened, the relative risk of holding equities has diminished while the returns they have generated have been higher than those of other asset classes.   What equities do in the short term, even a year or two, is often anybody’s guess.    To the extent that fundamental analysis can help toward determining future equity values, investors need to look ahead three, four, five years or more before reasonably expecting t
Post a Comment
Read more